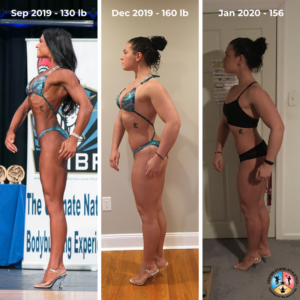 Today's client highlight is about showing that not ALL transformations ones you can physical see; the most powerful transformations are often more mental than physical. Although you can see some physical changes in Lindsay's photos, it's what she's been able to transform with her mindset that is really reaping rewards for her.

Lindsay's story is an all-too common one for a lot of competitors. Compete using extreme diet methods and strict meal plans and rebound horribly. This is often due to having a poor relationship with food, feeling deprived, putting everything into black/white or all/nothing thinking.

Lindsay was very successful in winning her pro card in her first show, prompting her to turn around and compete as a pro not even a year after. That's two back to back shows with no real downtime in between for recovery. After her 2nd show, her pro debut, initially things were going along well in her reverse, until things got out of control and her relationship with food worsened.

Monday through Friday she was strict and on plan. There were no deviations because deviations were "bad" as taught by the meal plan concept. Come Saturday, it was time for the coveted "cheat meal" which turned into an all-out binge, that often lasted into the next day., which then brought about feelings of guilt and shame. At the same time, Lindsay was relentless in the gym. Again, all or nothing with brutal workouts full of endless exercises, sets and reps.

In the midst of all of the abuse, her body rebelled. She became incredibly fatigued, chronically inflamed, sore, and sick. After testing, Lindsay found out that she had an active EBV/mono virus and also tested positive for the inflammatory markers of Lupus/Connective Tissue Disease. This is when she reached out to us for help. She needed to get herself mentally and physically into a better place. She was sick and tired of being sick and tired.

In just our first 6-8 weeks working together, Lindsay has completely changed her mindset and relationship with food. She's learned to eat a flexible diet using macros that is FULL of nutrient dense, inflammation fighting foods. Instead of cheat meals that turn into days of binding, she's learned how to fit treats into her day without feeling guilty and how to have dinners out with friends without going hog-wild.

Not only has she changed her mindset with nutrition, we completely revamped her training from 6 days of week of 100s of reps and sets to only 4 days per week of lower volume training and a focus on rest and recovery. Along with mentally and physically FEELING better in every aspect, Lindsay just had her most recent blood tests come back showing that she's lowered her inflammatory markers by nearly 200 points!

Lindsay has been incredibly coachable and open to change, which is a big part of her success! Here's just a few of Lindsay's check in quotes to show how much she's been able to change in just a short period of time.

"Really good energy in the gym, continuing to progress lifts. I feel like my strength has improved more in the past few weeks then it has in over a year. I feel fully recovered going into the sessions. Really look forward to workouts bc I have strength goals instead of just aesthetic goals. Good for me mentally and emotionally as well. I always feel better after I workout. Seem to be recovering better and better."

"When I have two days in a row of workouts when I first started I would definitely feel it hit me by the end of that second session but now I feel fresh each exercise. Especially for the lower body exercises like I'm hitting numbers for a set of 6, 8 that I used to only be able to do for like 2 in my old programming for the past year or so, I'm super happy with the way the workouts are going."

"Really improving on food focus as well as recovery. Been making sure I get as much rest as possible, taking a few epsom salt baths, sauna, and green matcha turmeric tea. Normally I am super type A high stress individual, but when I feel that coming on I literally just am like nope I'm more important and if I let this upset me then it could impact my recovery etc. I want to keep doing that this week."

"Really happy with nutrition this week. went out to eat Saturday, looked ahead at menu tracked a reasonable portion I was getting on MFP then worked the rest of the day around it, didn't hoard all my macros for carbs and fats for that meal and saved some macros so I could have some food even after dinner. This strategy worked well for me and I was wayyy less food focused. Really happy with that. And today, even though its a random Wednesday LOL have plans to go to chik fila, something I would normally never do bc it's not a Saturday, and am just going to track what want, then fit the rest of the day round it."

I'm incredibly proud of the progress Lindsay has been able to make so far and we still have a ways to go. We're working on even more options for her to be flexible with her nutrition and less food-focused as well as continuing to focus on rest, recovery and reducing inflammation. Currently there's no competition in sight and that's because she's focused on what matters most - her health! The stage will always be there, but not for long if you relentlessly beat the crap out of the only body you have. Take care to give your body mental and physical de-loads, proper nutrition, rest and recovery and your body will pay you back dividends!